Justice Eady says that the footballer that Imogen Thomas claims she had an affair with is entitled to a reasonable expectation of privacy – and suggests that she is blackmailing him.

But how much privacy has he got left after all rumours on Twitter and hints in the papers? I don’t know who he is, of course. But if you search for the most commonly suggested player alongside Imogen Thomas’s name, Google says that there are 394,000 web pages that contain both their names.

Type her name into one of Google’s keywords tools and the page is full of top and rising searches suggesting one, and only one, footballer’s name.

This chart shows what Google says people are searching for – you can see how many times I’ve had to black out one particular footballer’s name so as not to breach the injunction.

We might not know who he is. But a lot of people are searching for one name.

To confuse things further, the rumours of six-month affairs appear to be much worse than the three meetings that the footballer says actually happened. Although a Twitter account claiming (apparently genuinely) to be run by the wife of the Sun’s news editor has suggested in a series of tweets that there is nothing in the blackmail claims. 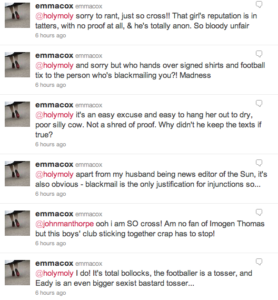