During the Duke and Duchess of Cambridge wedding on the 29th day of April 2011. This made it the first modern royal wedding in over one decade, and this broke tradition in several subtle ways. This is from their wedding night to Kate them choosing to wear her hair down, which has not been done in 350 years.

Even the bride did her makeup instead of allowing professionals to do it. This was reported because it was her wish for Prince William to recognize her as she walked down the aisle.

However, her glam was not the only tradition she modernized. Even at that, we all know of Kate Middleton’s wedding dress, which was a mixture of history and the present-day elements.

Buckingham Palace at that time explained that Miss Middleton selected the British brand known as Alexander McQueen for beautiful craftsmanship and as she had respect for traditional workmanship and her love for the technical construction of clothing.

So she wished for her dress to be combined with tradition and modernity with the artistic vision that characterizes Alexander McQueen’s work.

Unknowingly, the bride prefers to dress her sister, Pippa Middleton, in an ivory dress. This is to match hers that’s normally a big no since people could confuse the bridesmaid with the bride.

During this saga, there is Google Insights that gives you some good information into how many people search the internet. But it is an often depressing insight if I must say.

I think I should keep the graph here for you guys to see. New update … Be aware that there’s another 3% that relates to Pippa Middleton ass, which isn’t showing in the graph below. 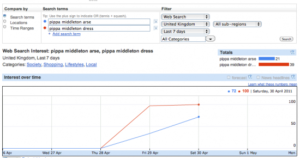 Note that the interest in the dress has peaked, but is still rising in the arse.

Nobody knew that Pippa’s dress was also designed by Sarah Burton, which matched Kate’s in color and also featured a few similar laces on the neckline and its button down the back.

However, the dress was even more fitted, and this is where Kate was flared and features a cowl neckline. Hope we all will agree on the overall effect of looking beautiful and unexpected.

Even at that, the Duchess of Cambridge also made sure to dress her flower girls in ivory dresses using puff sleeves and full skirts.

This whole Pippa Middleton bum wedding saga was so popular back then. As I said before, if this Royal Wedding happens to be held in the present day, there will be a huge inflow of traffic. This will happen the same day and the day after and will continue for months.

The number of daily searches for “Pippa Middleton bum” will be running in millions.

Finding A Good Freelance Writer For Your Research Paper

Write My Paper Help With Skilled Writers At Writingmypapers Net