Google’s logo over the weekend showed one of its Os being abducted by aliens.

Clicking on the logo took you to a search for ‘unexplained phenomenon’.

There was much tweeting about what it all meant.

But there was also an SEO scrap amongst some British newspapers – which the Telegraph won, as this screenshot shows.

It was the first news and second web result for a search at google.co.uk. 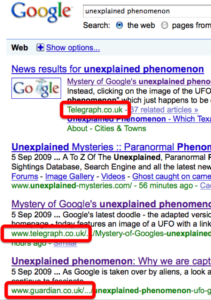 Unexplained phenomenon results appear when you click the google logo

So how come the Telegraph won?