The most annoying 1,200 pixels on the internet

The web version of Twitter has a really annoying usability issue. Let’s say you look at some tweets. Then your computer goes to sleep. Then you return to looking at some tweets.

There will be a gap in your timeline for the period when the computer was asleep – and there’s no easy way to make those tweets reappear. 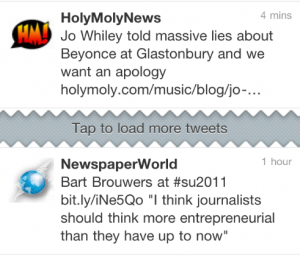 With the mobile web version, there’s a handy “tap to load more tweets” jaggedy bit of the page – as you can see from the screenshot (showing a gap when my phone was asleep for an hour).

Once you get to the end of the most recent tweets to load, you’ve given a way to fill in the gap that exists.

On the web version of Twitter, or at least the version that I seem to get on my Mac on several different browsers, that jagged bit is replaced by … a line that’s twice as thick as the line between normal tweets.

But how do you make those tweets appear? Apparently you can’t, without reloading the page (which you might not want to).

Or am I missing something …?