The (in)accuracy of Alexa: more evidence not to rely on it

I’m giving up comparing websites using Alexa.com’s data. Checking the accuracy of Alexa data using ABCe numbers led me to believe they were good enough to rely on. But the Times reckons the Alexa numbers in my latest post relating to referrals from the BBC were rubbish – and the Guardian agrees.

Alexa data vs the Times’s own 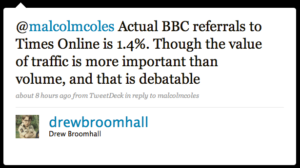 Alexa had claimed that 4.1% of Times visits are referrals from the BBC.

But Drew Broomhall, the search editor of Times Online, tweeted to say the figure was in fact just 1.4% – just a third of what Alexa is claiming.

Alexa data vs the Guardian’s own 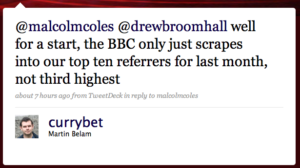 Martin Belam, Information Architect at the Guardian, saw the exchange and offered to reveal the Guardian’s figure for BBC referrals if I found out the Alexa one.

So I did: Alexa claims that 4.44% of visits to the Guardian were preceded by a visit to bbc.co.uk, making it the Guardian’s 3rd most important referring site.

Martin’s reply: “Well for a start, the BBC only just scrapes into our top ten referrers for last month, not third highest”