Earlier today, I pointed out that the Telegraph was only at result number 7 in a search at Google for Mps’ expenses. A result I considered to be rubbish.

It appears to have dropped even further now as downingstreetsays.com is now ahead of it, as the screenshot below shows.

This is even worse by Google, as the Telegraph is now at result 8 – even though it is the original source of all the MPs’ expenses stories, and should pretty obviously be number 1.

Over the weekend, the Telegraph was 2nd behind the BBC. This morning it was 7th. Now it’s 8th. Is it dropping like a stone? 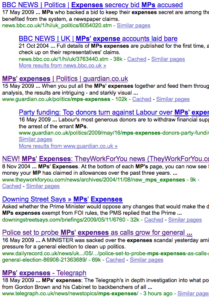