Ow.ly and Hootsuite in widespread breach of newspaper / other site T&Cs

However, rather than redirecting to the target URL, like most URL shorteners, ow.ly is framing the destination URL, in direct contravention of many sites’ T&Cs. 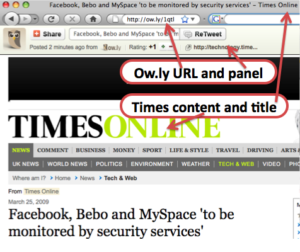 Owly framing other websites – against their T&Cs

The Times, for instance, says “unauthorised framing of or linking to the Website is prohibited”. This screenshot shows how ow.ly is ignoring this.

The title is the Times’s site’s, the content is from the Times … but the URL is still the ow.ly one, there’s an ow.ly box along the top of the page, and there’s no Times favicon.

T&Cs forbidding framing are common (as are newspapers and other sites forbidding deep-linking) – and ow.ly is ignoring them.