Ofcom: we need action not research on broadband speeds

Ofcom has revealed that people don’t get the broadband speeds they pay for. Well, duh. Here’s a timeline of how we already know that. Their research isn’t groundbreaking or new or revealing something for the first time, as is being claimed. 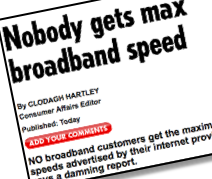 The Sun’s take on today’s story

What we need is action: ISPs should be forced to publish a typical range of speeds rather than an upto speed that no one can get.

Why Ofcom is behind the times

Here’s a potted history of the last 3 years:

The solution is easy. ISPs should be forced to publish a range plus a typical speed.

How they work it out is up to Ofcom.

The money they spent on this latest research could perhaps have been better spent working this out?