Google is trialling a new feature in its search results that lets you see a preview of the webpages without having to bother to visit them. You can see it in this screenshot (from Blogstorm’s Google preview post). My immediate reaction was “what about copyright”? 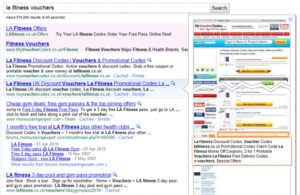 Courts have, in fact, allowed Google lots of leeway in showing other people’s copyrighted work in its results.

“the claimant had made the content of her website accessible to search engines and had not made use of the technical possibilities available to her that would have allowed her to except her works from being searched and displayed by search engine providers.”

Essentially, if you don’t block Google via something like a robots.txt file, you can’t complain if it shows your images in its results.

Google won in the US courts as well when sued by Perfect 10 over a similar issue. There:

“the Court upheld important policies of fair use and freedom online and resisted Perfect 10’s plea to put copyright owners completely in charge of how and when search engines and other online intermediaries can provide their users with links to images”.

Those cases covered Google showing individual images from a webpage.

Google’s cache feature – where it lets you see a full version of the page it last indexed (without visiting the site in question) – is also not seen as a breach of copyright, according to a US District court which ruled in 2006 that:

“Google’s cache feature, which allows users to access snapshots of web pages taken when they were viewed by Google robots, does not breach copyright in those web pages. …Use of the material is a fair use, said the Court.”

(If you want to understand the difference between Google’s index – which doesn’t copy the page – and Google’s cache – which does – read this excellent explanation.)

I’m not a copyright lawyer. But Google preview sounds like it’s just pushing at the same open door. If you don’t like how Google treats your work, don’t let Google index it.

Pay For Essay Author Online From $12

Pay For Essay Author Online From $12