Proof the Express doesn’t update its website on a Sunday

It’s 11.20pm on sunday night – more than 9 hours since the Bahrain grand prix finished and about 5.5 hours since Blackburn beat Wigan. Oh, and there might be a global swine flu pandemic. 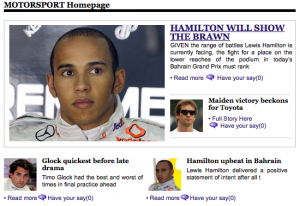 Yet the Express isn’t reporting any of these stories on its website (express.co.uk) – despite its strapline of “Breaking news, sport and showbiz from the World’s Greatest Newspaper – updated 24/7”.

The Express’s motorsport page leads with a preview of Lewis Hamilton’s chances (‘Hamilton will show the Brawn’) – even though he’s already finished 4th.

Express.co.uk is still previewing a game that’s long over

Its football page doesn’t mention the Blackburn Wigan game at all.

And the site’s Blackburn page leads with a profile of Sam Allardyce published on Saturday. There’s no mention of the result.

Not the first time …

I’ve previously pointed out how it took several newspapers 90 minutes to publish the results of an England game.

But this seems a new low – and what’s more, a search in Google news reveals the latest stories it has found for Express.co.uk were published 15 hours ago.

This means it’s the only major UK newspaper not reporting the swine flu outbreak on its homepage.

Express.co.uk: clocking off at 8am

All of which implies that the Express doesn’t update its website after 8am on a Sunday.

Although it does always replace the Express logo with the Sunday Express one online for the day – phew, it’s important to get that right …

And, to be fair, there are a few that haven’t yet reported that TV presenter Jonathan Ross and EastEnders star June Brown didn’t win Baftas tonight. The Independent, Sun, Mirror and Express don’t have that story – though their rivals published it up to two hours ago.