Digg has started adding nofollow to some of its links – the idea it to stop people spamming the service to get links back.

According to its blog: “We’ve added rel=”nofollow” to any external link that we’re not sure we can vouch for. This includes all external links from comments, user profiles and story pages below a certain threshold of popularity.”

So, what’s the threshold of popularity?

Orignally, from my quick hunt around, I reckoned it was somewhere above 200. However, some sites appear to be trusted and need fewer.

And Ben Hazell tweeted to say that it varies by section: “you can get followed with 60 in Lifestyle, but no followed with 200 in news”.

Final update: Adam Sherk seems to have nailed it. When a story goes popular, the nofollow is removed. The number of Diggs needed to go popular varies by category.

Here are some screenshots to demonstrate. The pink links in the screenshot are nofollowed. Let me know if you spot a different patttern …

Below 200 Diggs: most news links nofollowed

A few trusted sites get a followed link below 200ish – but nearly all are nofollowed in the news section. The threshold is much lower in lifestyle .. 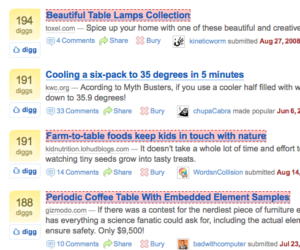 Below 200 Diggs, nearly all links are nofollowed

At around 220, many sites start to get a followed link whichever section it is – which is because they will have achieved Digg popularity. 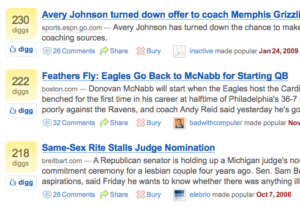 Around 220 Diggs, many sites get a followed link

You seem to need far fewer Diggs here to get a followed link. 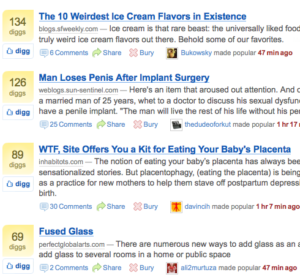 igg threshold is much lower in lifestyle

Some sites are more trusted than others

New Scientist seems to need not very many Diggs for a followed link – the NY Times a whole lot more – but this may be related to the section the stories are in. It’s whether the story was made popular that accounts for this difference.

NY Times doesn’t get a followed link with 149 Diggs

New Scientist gets a followed link with just 58 Diggs

Sites are, however, treated differently for different stories

The Telegraph has two stories with quite different Diggs – the one with 261 Diggs is nofollowed, the one with 214 Diggs is followed. So the nofollowing clearly isn’t just done on the trust rating of the site plus the number of Diggs – again, this might be a section thing. It’s whether the story was made popular that accounts for this difference.

Share. Facebook Twitter Pinterest LinkedIn Tumblr Email
Previous ArticleHas Google redesigned the header of its results page (for the worse)?
Next Article Me on Sky News talking about the anonymity of Baby P’s killers