Carphone Warehouse has slammed Microsoft as ‘useless’ and ‘crap’ – making use of Google’s new sidewiki feature to make sure that everyone visiting the Microsoft site knows it too.

At least, I assume that’s what’s going on (yes, it’s obviously not what’s going on, but people should be careful…) from the fact that the Unix administrator of Carphone Warehouse has left the following Sidewiki: 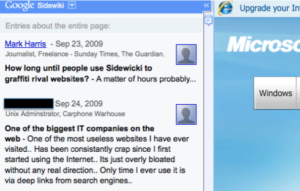 Sidewiki abusers – it says who you are …

That quote in full is:

One of the biggest IT companies on the web – One of the most useless websites I have ever visited.. Has been consistantly crap since I first started using the Internet.. Its just overly bloated without any real direction.. Only time I ever use it is via deep links from search engines..

I’ve blocked out his name to spare his blushes. If you do this, remember that it says who you are. Unless you use a fake account to slag off the daily mail.