Update: They are now investigating it after all.

The Advertising Standards Authority (ASA) is one of those bodies, like the Press Complaints Commission, that needs to be sufficiently hard on the industry that funds it that no one thinks there’s a need for stricter statutory regulation – but not so hard that, er, anyone thinks there’s a widespread problem and demands stricter statutory regulation.

And from my experience of complaining about Nescafe’s website under the new rules, it looks like the ASA will be brushing online complaints under the carpet – so its stats on how many there are will be meaningless.

Brushing my complaint under the carpet 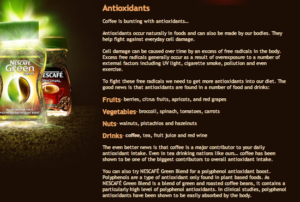 I’ve made a complaint that this Nescafe page makes these unsubstantiated health claims:

Here’s the reply from the ASA (in italics) with my comments underneath:

Not a good start – I didn’t complain about Nestle Nespresso. I complained about Nescafe Green Blend instant coffee.

Thank you for contacting the Advertising Standards Authority.

We have recently received a similar complaint to yours which is currently being investigated. The investigation is in relation to what we consider to be objective claims on a Nescafe poster which we have asked the advertiser to substantiate.

Is it that similar, though? How can I tell as you haven’t confirmed what my complaint was or told me what the similar one is about. The only verifiable factual statement you’ve made relating to my complaint – the name of the product – you got wrong. I’m not sure I trust you on this similarity thing therefore.

The Investigations team has made substantial progress on this matter and, given that the claims concerned and the complaint are so similar to those that you mentioned and that it does not appear that your complaint raises any additional points, we shall not be adding your complaint to the current investigation.

If the other complaint was similar, I could live with mine being rolled up into it. But that’s not what they’re doing: “We shall not be adding your complaint to the current investigation”.

Yes, they are throwing away my complaint – one of the first to be made under the ASA’s new online advertising powers – even though it’s “so similar” to one where they have taken steps to ask the advertiser to substantiate it.

If they adjudicate on the other claim and find it misleading, no mention will be made of my complaint about the online version of the claim. So the ASA won’t have to add a large, international brand to their non-complying digital advertisers page.

As a result, once the investigation has been finalised we shall send you a copy of the adjudication, the findings of which will apply to all the advertiser’s marketing material. In the meantime, thank you for your patience.

Actually, not thanks. This looks like brushing things under the carpet.

And having turned to it, maybe they’ll be turned away?