Ever done a search for Ann Widdecombe? Me neither until today. There’s an interesting image shown, as you can see – and from an SEO point of view, it’s as interesting as it’s funny. 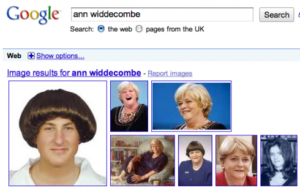 Ann Widdecombe has a new hairdo

The image Google is showing as the number one result is from the www.greatwigs.co.uk website. However, the image in question is no longer on that site, although it is linked to from this Guardian article (where it says “Ann, as ever resembling a peroxide Friar Tuck”).

Try to click through to it, and you get a 404 page not found. So why on earth is Google returning a non existent image as the first result? And is that all you need to rank first – one link from the Guardian? Or does its incongruity mean that so many people click on it that Google has been fooled into thinking it must be relevant?