It’s a given for most SEOs that if there’s an image on a page, you should use ALT text on it with relevant keywords. But have you ever thought what that means for someone who is blind and is relying on the ALT text to tell them about the image? To find out, I asked an accessibility expert who’s blind and uses a screen reader.

What ALT text is for

Search engines are supposed to use ALT text as a ranking factor – and ALT text is an accessibility requirement to help people using screen readers understand what the image is about (unless it’s something to do with the design, like the corner of a box when you can use alt=”” (null) instead).

But there are many, many cases where images contain no information – they’re really just there to make the page look attractive, such as this picture of an eye.

With these images, forcing someone with a screen reader to listen to your keyword heavy ALT text sounds annoying – they don’t end up any better informed.

How ALT text works in practice

But before I launched my campaign for people to stop using ALT text so much, I asked Robin Christopherson, who is Head of Digital Inclusion at Ability Net and also blind, a couple of questions, using this story on the Daily Telegraph site as an example. 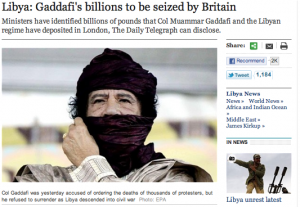 It’s a fairly typical news story in that the picture of Gaddafi at the top adds no information to the piece – it’s basically decorative.

The ALT text of “Col Gaddafi was yesterday accused of ordering the deaths of thousands of protesters, but he refused to surrender as Libya descended into civil war” is identical to the caption underneath – and both are identical to a paragraph further down the page. Imagine having a screen reader read that out to you three times …

So my two questions to Robin were:

The views of an expert who is blind

Firstly I would say that it’s great that you care about minimising the level of clutter/repetition for screen reader users and want to achieve best practice in ALT tagging images.

The reason why I would tag it and not null tag it is because simply knowing there is an image there is sometimes useful info (for example in discussing the page with a colleague, or wanting to grab that image to paste elsewhere) and not knowing things are present on pages can be a disadvantageous position to be in.

Compared to the amount of hellish frustration screen readers have navigating around anyway the minor duplication in this instance is a mere nothing.

I know that this may be seen as an argument to null tag it so that the lives [of people who are blind] are made that tiny bit easier – but believe me no one would be frustrated by duplication on this level and we always appreciate knowing that accessibility has been considered on a page even though it might include a bit of duplication.

One last comment is that sometimes that image might be a link too. If the message got out that it’s fine to null tag images wherever there is a suitable caption below, then someone might null tag an image that is also a link – in which case a screen reader reads out the destination url despite the null tag (as screen reader developers consider these too important to ignore).

The last point is also the reason why, if you are going to have no ALT text, you should use ALT=”” rather than leaving out the ALT tag. If you do leave it out, the screen readers will read out the file name, which will be as much of a pain as having a URL read out.

So I’m going to carry on using ALT text on my images, even when they contain no information (Update: And Robin asked me to point out that any imagery that really is “purely decorative eye candy” should still be null tagged). But let’s all try to make ALT text as useful as possible – and work with our captions rather than duplicate them. And let’s hold off on the keyword stuffing, too.

If you enjoyed this post, you’ll probably enjoy my post on the usability of taps and their lessons for web design.

You might also like these posts on other websites (but read the tap one first, it’s ace):

Homework in a Electronic Data Room